Time to Have a Talk on Travel Talk

I remember being stuck on a bus (and then continuing being stuck on a metro) with some students from my university in Budapest several years ago, at some point just honestly asking them, “Can we pleeeeeease talk about something else than our classes? For example, I don’t know how about you, but I am personally am very excited to see The Avengers…”

I was reminded of this situation in Bogotá, under rather different circumstances. But before I explain this weird déjà vu, let me quickly tell you how freakin’ awesome Bogotá was!

“All these nice things people say about Colombia… I think…I think they’re true!” was my first impression of this city, and a week later that impression didn’t change much, let me tell you. Small cafes, street art, cosy pubs, colourful houses, the Andes that I would forget were there and would get taken aback once in a while, lots of young people (makes sense, with all those universities there) and – let me use a word it took me some time to embrace – chill atmosphere that seemed to be exactly what I needed in the middle of my work travels. Oh, Bogotá, you will be missed. Oh, blog entry, you shall be written.

I was staying in one of the best hostels I’ve been to in my life, which made everything even nicer, and even the people I met there were somehow cooler than average (yes, I’m using a highly subjective and arrogant scale here, but still). I met an awesome British girl with just a perfect sense of humour, a superfriendly girl from New York, a Dutch Ryan Gosling with probably the best tattoos I’ve seen in my life, a sweet Aussie guy who seemed to appreciate electronic music as much as I did (and whose head I shaved for him to finish his head tattoo!), a supercool American guy who has in Bogotá just for the Labour Day weekend, and many others (you know who you are). The chats, laughs, cable car rides, tattoo stories and beers we’ve shared will never be forgotten, ay! (…except for the party bus experience that shall never be remembered). 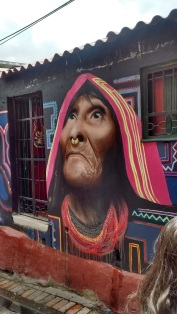 Yet during my 10 days in that hostel muy chevere, I have started to notice an interesting phenomenon. It appeared to be a phenomenon that I had encountered earlier in my life, however, its extent was much smaller before. I’m talking about Travel Talk here. About continuous, uninterruptable Travel Talk saturated with name-dropping, eliminating any opportunity to move to any more general topic extending to Real Life.

Don’t get me wrong: to ask someone what s/he is doing in Bogotá and if it’s a part of his/her bigger travel plans is more than OK, and makes so much sense to ask. It also makes sense to share your own short-term travel plans. I mean, c’mon, being a pretty chatty person myself, I’ve been exchanging chats like that for quite some time. It would be a nonsense to somehow self-censor yourself when you’re exploding with awesome experiences and memories of beautiful places you’ve seen.

But holy shit, that Travel Talk reached some alarming levels in Bogotá. Without even being asked, one traveller (“traveller” – that’s the only role you have when you’re travelling…) would tell the other one where s/he was coming from, names of future destinations, even names of potential future destinations and all the doubts surrounding making these decisions. Then, the other person would reveal his/her travel plans, where s/he has decided not to go and why, and how tough it was to make these decisions. More or less, that was the small talk formula I have discovered (invented? My ego agrees) in Bogotá.

I have found myself in situations stuck between two small groups of people having their Travel Talk, imagining a scene in a movie when a camera zooms on one (lonely?) person in the middle of a busy pub, looking all bored or feeling excluded. That was me, yep, but not feeling sad or excluded, rather just longing for a good chat on, for example, how mind-blowing the new Mad Max was or something.

Sentences starting with a highly unnecessary “When you’re travelling, …” or/and ending with just as unnecessary “<…> it happens when you travel more, you know” made me reflect on my own way of talking, and whether I would use such expressions talking about, well, everything. If anything, I was traumatised and will be afraid to use expressions like the abovementioned ones in the future.

Once again, there’s nothing wrong with Travel Talk. It’s just…much nicer than that Travel Talk leads to something else, not necessarily travel-related. With the people I have briefly described above we’ve shared more than Travel Talk, and maaaan it was refreshing! It was…it was…Life Talk. Thank you, guys, for that.

(it’s a cool song that the reception at my hostel was playing, an unexpected piece with Antony from Antony and the Johnsons!)