We realised it was a great piece of advice on our second day of hiking, after having passed the bridge we were looking for so desperately the evening before. And what great luck it was that we didn’t find that bridge earlier: the nearest pousada was still about 2 hours of a hike/climb away, which would have been pretty freakin’ tough to do at night. But so now the donkey shit was marking our way, and, after 5 or 6 hours of going up and down some hills and crossing a mountain river (the rocks of which we quickly turned into a picnic place, naturally), we stopped for a second and listened.

There were voices coming from the other side of that same mountain river. A pousada or not, we didn’t want to risk: no way we’ll be hiking till the sun sets, again.  We crossed the river (using some logs that were just there, underwater), and decided to hike no more. Why? Those voices turned out to be coming from probably the most beautiful and scenic places I’ve ever camped in my life. It was a huge pousada situated on the hillside and facing a breath-taking valley. All that was left to do for that day was to put up our tent and reward ourselves with a swim in that river.

The next day was dedicated to one object only: Morro do Castelo. No more heavy backpacks, just water and, in my case, efforts to fight my fear of heights (though, I’d say, technically, it’s not fear of heights per se but a fear of fuckin’ falling and dying).  Oh yes, and we also had to cross a cave on our way there, which inevitably resulted in some Gollum jokes (and, due to great acoustics, some singing). After two hours of hiking/climbing, we stood in awe looking at what Chapada Diamantina iconic (read: google) pictures show: a stunningly beautiful canyon that, in my head, looked very North American for some reason. That reason most likely being my ignorance in terms of Brazil’s geographic zones. And so like previous days in Chapada, this one, too, could be summarised in this way: it was pretty freakin’ tough, but definitely worth it.

At this point, I thought I should try to describe how big the moon was that night, rising from the mountains covered in clouds, but, honestly, words fail me here. OK, words fail me often in general, so maybe this compliment doesn’t seem that strong, but, damn it, it was just magical. I was seriously considering drawing it (somehow), but a caricature of a beautiful sight just wouldn’t do, I don’t think.

After admiring that moon for hours, we finally decided it was a good idea to get some sleep before our last hike, crossing the rest of Chapada, the next day. We said our goodnights, started to feel comfortable enough to fall asleep, and, as I was closing my eyes, I felt something weird. It was one single raindrop that touched my skin. “Ehmmm, what?” was my initial reaction, as, as one could assume, raindrops inside of a tent is something you just don’t expect. Unfortunately, it wasn’t my paranoia kicking in: as I touched one side of the tent, it felt all wet, with some considerable amount of rain water soaking through what was supposed to be some kind of a waterproof material. “Ehmmm, what?” got suddenly replaced by a reiteration of “WTF?!”, while Luca, being all, to say the least, highly optimistic, was trying to convince me to, “just move to the other side of the tent”. “Luca, there is WATER in our tent, and the rain is only getting stronger. I think we should use some good ol’ Buddhist shit here: accept that the situation sucks and do something about it.” That something ended up being quickly transporting our stuff into an open area with some sort of roof and then – there was literally nowhere else for us to sleep – sneak into one of the unused rooms of our pousada and sleep there for several hours. 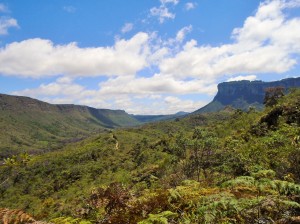 Several hours of sleep and a hike that was awaiting us was not an ideal combination. And yet, determined to reach Guiné, a small town on the other side of Chapada, in one day, we bravely hiked/climbed those…I don’t know, more than 14 kilometres. I mean, 14 km in itself wouldn’t be that bad but for the fact that some part of that was us going up a hill, then actually climbing up a mountain, then crossing some valleys, hoping that we could finally see Guiné behind each bigger natural object. “OK, so we should definitely see it behind this hill…” was a sentence we were repeating for, no joke, three hours or so. Finally, when we actually saw that town in the horizon, it was still a huge valley and an unpaved desert-like road away. Dragging our feet, finishing our supplies of water, Luca and I reached our pousada before sunset, ate a proper meal, and did nothing more but crashed embarrassingly early.

We caught some rides the next day, the very first of which made us realise one thing very quickly: how huge Chapada actually was. We had been hiking for four days and still haven’t seen even a considerable percentage of all these mountains that we were now looking at through the windows of an old car which, apparently, had tamed the crazy roads of the region well. It’s true, we had done the Vale do Patí, the very heart of Chapada Diamantina, maybe the most stunning part of this national park. However, maybe precisely because of this there was this longing for something we hadn’t even properly left; a longing for the peace and quiet that is definitely worth all the cardio work.

It was a bit weird to come back to Salvador, and my first day after our trip felt both empty and sad. To have internet access after six days wasn’t as exciting as one might imagine, and it took me a while to readjust to the heat I was previously so happy about. It all became much better later, but that longing lingered. Fortunately, a truly incredible thing happened in my life soon after this trip, which definitely deserves a blog post. I finish this one with a cheesy quote; it has sort of become a tradition. 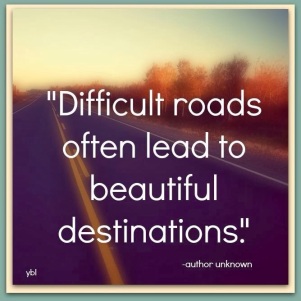