The first time I visited Ireland was back in 2007, the summer before my freshman year in college (yes, now you can more or less successfully calculate my age). “Ah, finally, after all those years of English, I’m going to an English-speaking country for the first time…” I thought, naively, hoping to understand people around me and be understood myself. Long story short: my confidence as a language learner dropped significantly, only to be restored several months later in Gettysburg.

I would occasionally – like on my way from Lithuania to the States or vice versa – stop in Ireland since that’s where my sister has been living, and it took me…what, seven years, to finally acknowledge one simple fact: Ireland IS really nice.
Especially after having lived in Thailand, any talks about “uuuu, Ireland is so green” would seem highly Eurocentric and ridiculous at best. You want green (and relatively) untouched nature – go to Southeast Asia, oh c’mon. Having seen only the eastern part of Ireland, I would definitely appreciate the time I’d spend with my sister and my brother-in-law, but was never deeply impressed by Ireland’s nature, so often admired by many. Until this summer.

Since, as I describe it dramatically, my life plans have crumbled and I came back to Europe, I thought I should use this time to see some dear people. I saw (and am still planning our meet ups) my best friends from Lithuania, a friend visited me at home, I went to Berlin (see the strangely short earlier entry) and then came to Ireland for a sweet sister reunion. It’s been three years since my last time there, during which I’ve heard many times from my sister how we would go camping, to the other side (intriguing!) of Ireland, when I come to visit. Well, I did my part and my sister was committed to do hers.

So, after I have recovered from all the fun I had in Berlin, we embarked on our journey to the West. Not the Wild West, but a region close to Galway called Connemara. The trip started with me taking a nap and, apparently, sleeping through a small storm; it continued with some wine being passed among the non-drivers (that is, me and my sister) and some sweet music that will always be associated with this particular trip. Hills started to appear and my scepticism towards this cold island began to diminish. 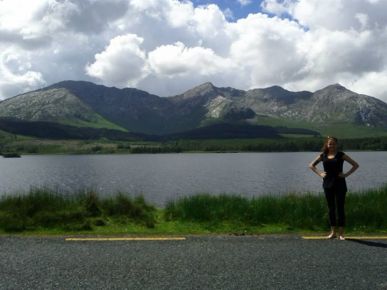 What followed next replaced that scepticism with not-so-secret – not after this blog entry – fascination. First we stopped at some national park (?) and climbed what I considered (and stand by my definition) to be a mountain. I’ll leave it to my sister to tell you about my small panic attack on our way/climb back. Then, we got to our campsite where more fun was awaiting. We played cards (what a forgotten type of entertainment!), biked by the ocean and around the hills (and sheep, sheep of course), did some yoga in the meadow right by the beach, were swearing constantly at the tiny bugs that attacked us and our tent after the rain, and then drove back home around lakes and mountains again. To make the composition of this story nicely circular, I will mention now that I did, again, take a nap on our way home.

If you have skipped right to this last paragraph avoiding my gibberish, here is all you need to know: I am now one of those people who praise Ireland for its serene landscapes. Yes, I gave in to this mainstream opinion, I know. Who knows what kind of confessions will follow next. Scary stuff…

ps. some road music for you